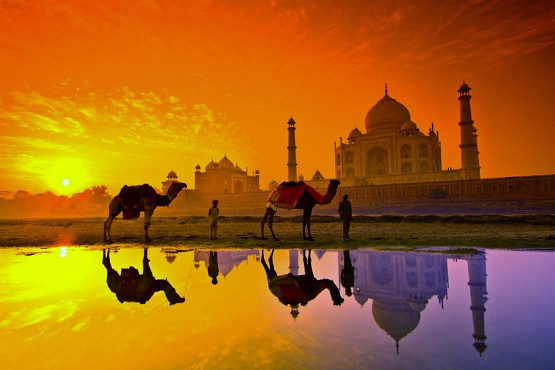 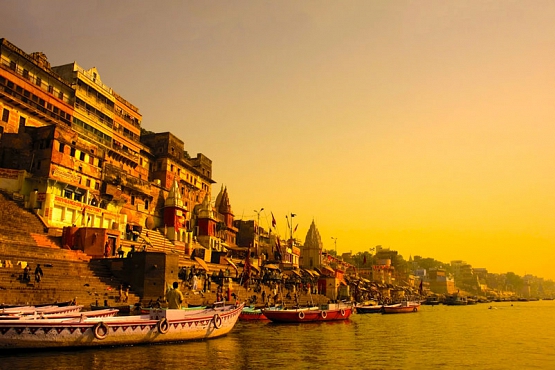 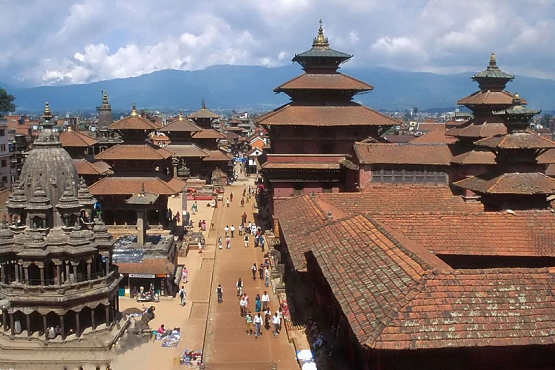 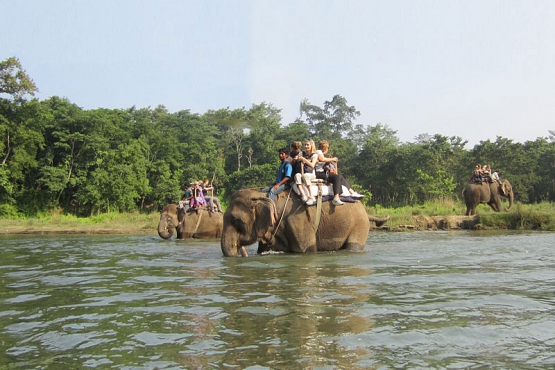 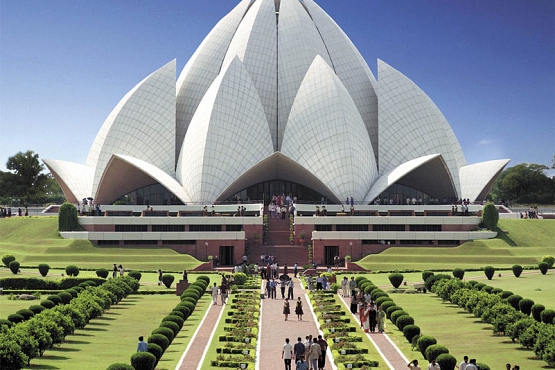 On arrival at IGI airport, Delhi, meet, assist and transfer to your hotel.

Check in & overnight at the hotel.

AM visit New Delhi, where you shall visit Qutab Minar a UNESCO World Heritage which is a five storeyed Victory Tower to announce the advent of Muslim sultans. Later visit Lotus temple or the Baha’I House of worship, designed by Iranian architect Fariburz Sahba.  The Baha’I sect originatedin Persia and is based on a view of humanity as one single race, a world where silence and order prevails.

Later visit Humayun's tomb. After breakfast visit New Delhi, where you shall visit Humayun's tomb. Built in 1565 by Persian architect Mirak Mirza Ghiyas, the first great example of Mughal garden tomb and inspiration for several later monuments. This type of garden is known as a charbagh and is based on a grid. Continue visit of the Parliament Buildings including North & South block which house several ministries as well as the Prime Minister's Office.

Later visit India Gate. A massive red sandstone arch, built to commemorate the Indian and British soldiers who died in World War I.

Later enjoy Rickshaw ride through streets of Chandni Chowk. Its most elegant boulevard laid out in 1648 and is lined with grand shops and mansions.

After breakfast, visit Qutab Minar a UNESCO World Heritage. It is five storeyed Victory Tower to announce the advent of Muslim sultans. Later visit Lotus temple or the Baha’I House of worship, designed by Iranian architect Fariburz Sahba.  The Baha’I sect originatedin Persia and is based on a view of humanity as one single race, a world where silence and order prevails.

PM visit the Swaminarayan Akshardham in New Delhi epitomizes 10,000 years of Indian culture in all its breathtaking grandeur, beauty, wisdom and bliss. It brilliantly showcases the essence of India’s ancient architecture, traditions and timeless spiritual messages. The Akshardham experience is an enlightening journey through India’s glorious art, values and contributions for the progress, happiness and harmony of mankind.

City Palace is a sprawling complex is a superb blend of Rajput and Mughal architecture, with open airy Mughal - style public buildings leading to private apartments. Its treasures, which include miniature paintings, manuscripts, Mughal carpets, musical instruments, royal costumes and weaponry, provide a splendid introduction to Jaipur's princely past, and it’s fascinating arts and crafts.

Jantar Mantar, translated into 'Instruments of Measuring the Harmony of the Heavens', it was built by Sawai Jai Singh II between 1728 and 1734. Jantar Mantar is a grand celebration of astronomical science and each instrument here perform a particular function and gives an accurate reading.

AM excursion to Amber fort. En-route photostop at Hawa Mahal known as “the Palace of winds”, with its ornate pink facade has become an icon for the city. The tiered Baroque like composition of projecting windows and balconies is five storeys high.

Amber Fort a UNESCO World Heritage which is at a short distance of 11 kms from Jaipur. The old capital of the Kachhwahas stands atop a range of craggy hills. You can take elephant ride from the base of the fort to the hilltop. Fort offers panoramic view of Maota Lake and the historic old town at the base of the hill. Embark on an Elephant ride to the top of the Fortress.

Morning leave for Agra. En-route visit the stepwell at Abhaneri & the fort at Fatehpur Sikri.

Fatehpur Sikri's BULAND DARWAZA, built by Emperor Akbar in honour of Salim Chisti a famous sufi saint. Its architecture is a blend of Hindu and Islamic styles. The Buland Darwaza, erected by Akbar to mark his conquest over Gujarat is a huge gateway.

Check into your hotel & overnight at the hotel.

AM visit the Taj Mahal a UNESCO World Heritage, Built by Mughal emperor Shah Jahan in memory of his wife, Mumtaz Mahal. It’s an image of the Islamic Garden Paradise, an enduring monument of love continually fulfilling beauty in white marble. To the poet Tagore it was " A Tear Drop in the face of eternity". Pietra dura has been extensively used to translate naturalistic forms into decorative patters that complement the majesty of its architecture.

Later visit the Agra Fort a UNESCO World Heritage. It’s built on the banks of the river Yamuna. Its imposing red sandstone ramparts form a crescent along the river front and encompass an enormous complex of courtly buildings, ranging in style from the early eclecticism of Akbar to the sublime elegance of Shah Jahan. Visit the gloriously inlaid Musamman Burj, a double-storeyed octagonal tower with clear views of the Taj.

Evening at leisure. Overnight at the hotel.

Early morning transfer to Agra railway station to board train for Jhansi. Upon arrival meet, assist & transfer to Orchha. Check into your hotel.

Founded in 1531, Orchha is dramatically positioned on a rocky island, enclosed by a loop of the Betwa river. The many layered palace has 132 chambers off and above the central courtyard and an almost equal number of subterranean rooms. The square sandstone palace is extravagantly embellished with lapis lazuli tiles, graceful chhatris and ornate jail screens.

Morning leave for Khajuraho. Upon arrival check into your hotel.

Overnight at the Hotel.

AM free at leisure. Later transfer to the domestic airport for your flight to Varanasi. Upon arrival meet, assist & continue visit of Sarnath. To Buddhists, Sarnath is as sacred as Varanasi is to Hindus. This is where Buddha came to preach the Dharmachakra or the Wheel of Law, his first major sermon after gaining enlightenment.

Varanasi also known as Kashi, “The City of light”, is one of the oldest cities in the world, dating back to 2600 years at the very least.

Later check into your hotel. Visit the evening aarti at the Dashashvamedh ghat, named after the ten simultaneous horse sacrifices performed by Brahma the Creator. The daily prayers “aarti” with people chanting vedic hymns, lighting lamps and praying with the priests.

A sunrise boat-ride on the river Ganges is the highlight of a trip to Varanasi. With people performing yoga, offering flowers and incense to the river, and take a ritual dip along the river front, bathed in soft light.

Later visit the city & temples on the ghats of the Ganges. Evening transfer to the domestic airport for connect flight to Kathmandu. Upon arrival meet, assist and transfer to the hotel.

Kathmandu, the capital city of Nepal, is one of the world's oldest cities. The old part of the city, with narrow medieval streets and lovely little shrines, centers on the Durbar Square. One can find distinctive pagoda-roofed temples, stone sculptures, old monasteries and historic monuments in Durbar Square. Visit Pashupati temple, Boudhnath, Patan & Swayambhunath.

Pashupati Temple: According to a folklore, a Bhaktapur native who was a great devotee of Lord Pashupati, had a dream in which lord Shiva told him to build a temple for him so that he could move into it. He obeyed this command and thus the temple came into existence.

Bouddhanath Stupa, the biggest stupa in Nepal, lies about 7 km east of the capital. The Bouddhanath stupa, also called by many as Khasti Chitya, is one of the oldest stupas in the country. After 1959, many Tibetans arrived and settled in Bouddhanath area. The stupa, a well-known Buddhist pilgrimage site, is included in World Heritage Cultural site list by UNESCO.

Patan Durbar Square complex, situated in the center of Patan city, also known as Lalitpur, houses the residence of the former Patan royal family. Patan Square and its surroundings are good specimen of ancient Newari architecture. There are three main courtyards in the palace: Mul Chowk, Sundari Chowk and Keshav Narayan Chowk. Mul Chowk, the oldest one, is at the centre of Patan square.

The Buddhist temple of Swayambhunath, situated on the top of a hill, west of Kathmandu, is one of the most popular, holy and instantly recognizable symbols of Nepal. The temple is colloquially known as the 'monkey temple' because of the large tribe of roving monkeys who guard the temple.

Morning leave for Chitwan. On arrival check into your jungle resort.

Chitwan which means the ‘Heart of the jungle’ is among the last surviving example of the continuous band of forests and grasslands, which once extended from the Indus River in Pakistan to the Burmese border. The main attraction here is the Chitwan National Park, one of the largest forests regions in Asia teeming with wildlife such as the rare great one-horned rhinoceros, several species of dear, sloth bear, leopard, wild boar, fresh water, dolphin, crocodile, more than 350 species of birds and the elusive Bengal tiger. Chitwan National Park is listed in the UNESCO World Heritage Site (natural) list.

Embark on a jungle safari on elephant backs. Overnight at the hotel.

AM jungle Safari in the Park. Later drive to Kathmandu. On arrival check into your hotel. 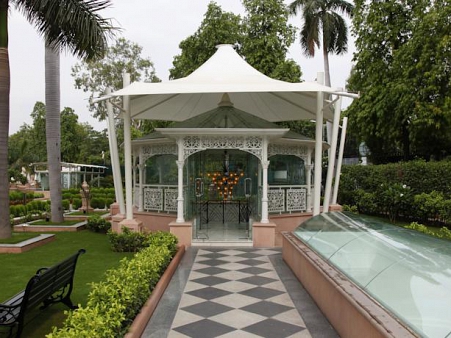 A luxury hotel with an awe-inspiring heritage interwoven in colonial elegance, it dwells in its modern delivery of old-style class and magnificence. Built in 1931 by Blomfield, one of Sir Edwin Lutyen’s associates and inaugurated by Lord Willingdon in 1936, it is New Delhi’s landmark Hotel, located on Janpath, the er...
More Choice of Hotel in New Delhi 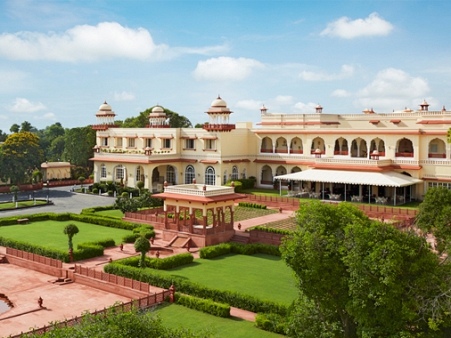 The majestic palace, a vast complex of regal rooms, pretty pavilions and charming colonnades set amidst 18 acres of landscaped gardens, traces its origins to 1745. The heritage palace has been painstakingly restored and recently refurbished to offer guests the exclusive experience of a royal lifestyle complemented by legendary T...
More Choice of Hotel in Jaipur 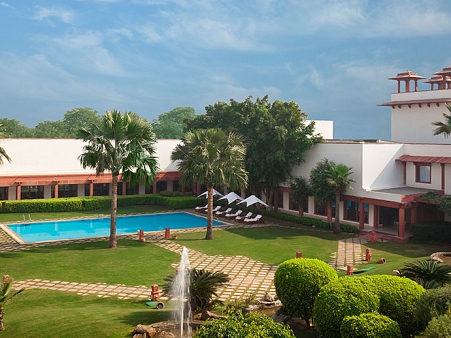 With in close proximity of the Taj Mahal, Trident, Agra is the perfect base to experience this city steeped in history. Beautifully landscaped gardens and water fountains welcome you to this charming hotel. Built in local red stone, reminiscent of the Mughal era, the hotel features 135 tastefully appointed rooms and suites, whic...
More Choice of Hotel in Agra 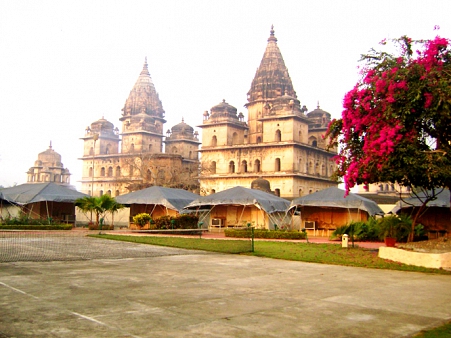 Situated on the banks of river Betwa, away from the hustle –bustle of town, is located the Orchha resort. A small meeting or training session can be organized in the board room which is fully equipped with all conference facilities. Children can enjoy rides at the garden with outdoor games .It also offers tented accommodat...
More Choice of Hotel in Orchha 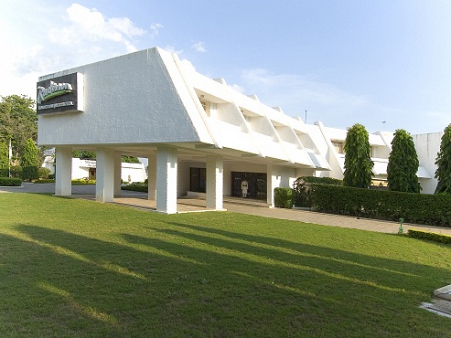 The Radisson offers four well-appointed suites and 86 luxury hotel rooms for a Khajuraho excursion you won't soon forget. Take a dip in the outdoor pool, stroll through the lush gardens and beautiful landscapes that surround the hotel or indulge at the multi-cuisine restaurant and full bar located on the property. The Radi...
More Choice of Hotel in Khajuraho 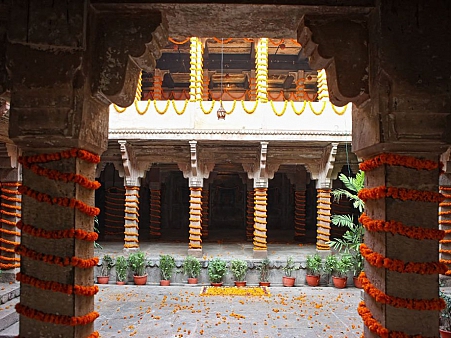 Hotel Clarks Varanasi is an island of tranquility in the ancient city of Varanasi. The hotel has very spacious room aesthetically designed and tastefully furnished with a colonial accent,  wide verandahs opening on to lush gardens. Complementing this luxury are the choicest of restaurants, an outdoor swimming pool in a secl...
More Choice of Hotel in Varanasi 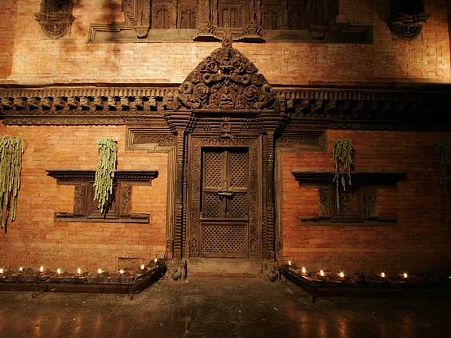 Built upon a rich tradition of Nepali hospitality and incorporating some of the country’s most exquisite architectural traditions, The Dwarika’s Hotel in Kathmandu is an authentic experience of Nepal’s ancient cultural heritage.With 86 meticulously designed rooms and suites, Dwarika's Hotel Kathmandu offer...
More Choice of Hotel in Kathmandu 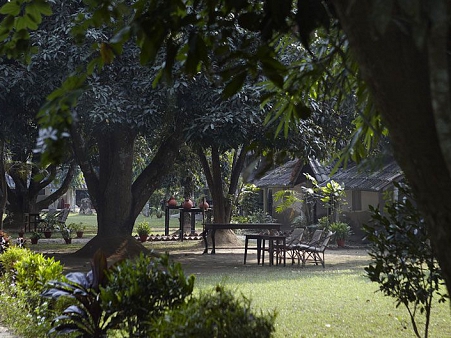 Tiger Tops Tharu Lodge offers guests the perfect blend of a quiet but captivating wilderness retreat, fused with local cultural encounters. A short bullock-cart ride from the Narayani River, the natural boundary between Chitwan National Park and the surrounding townships, takes you to doors of Tharu Lodge. Emulating the longhous...
More Choice of Hotel in Chitwan