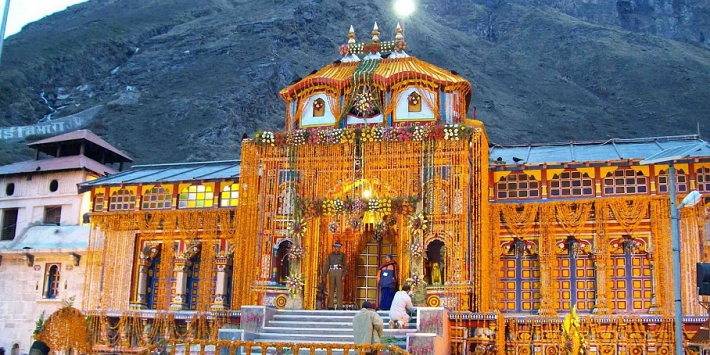 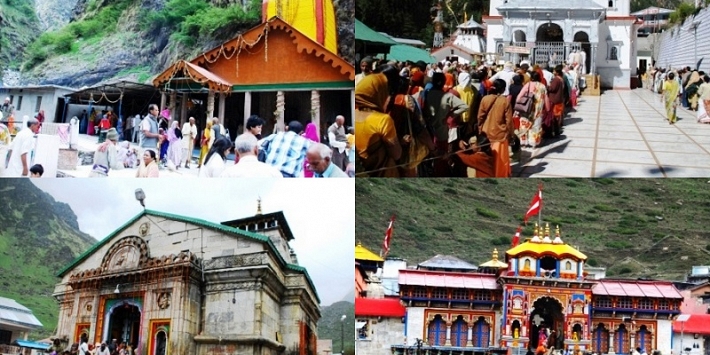 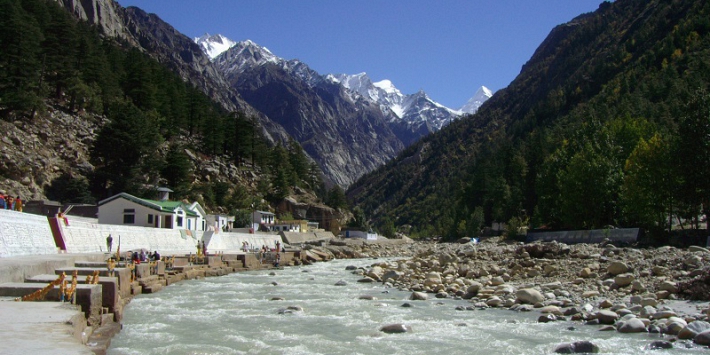 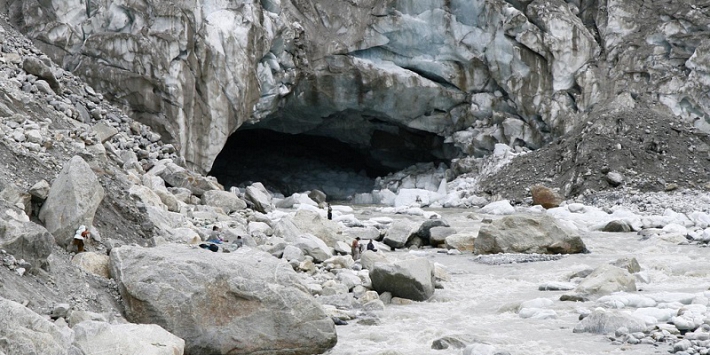 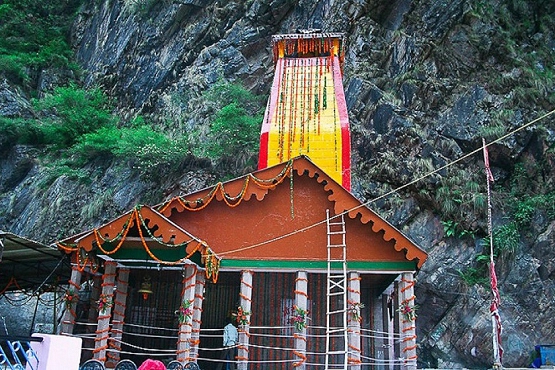 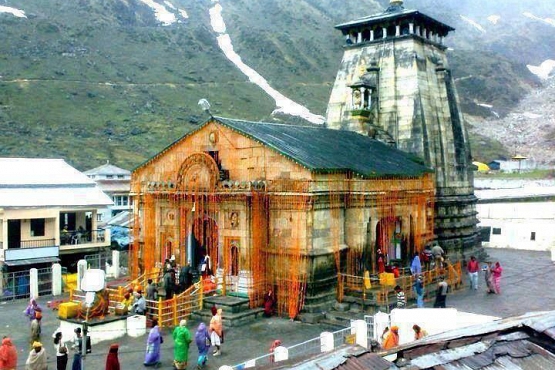 The Char Dham of Uttarakhand is an important Hindu pilgrimage circuit in the Indian Himalayas. It is located in the Garhwal region of the state of Uttarakhand. This hindu pilgrimage Char Dham circuit consists of four sites: Yamunotri, Gangotri, Kedarnath and Badrinath. All these locations are believed to be highly sacred by the Hindu religion. While Kedarnath is residence to lord Shiva and Badrinath is residence to Lord Vishnu. Yamunotri represent goddess of Shakti Yamuna, and Gangotri represent as goddess of Shakti Ganga.
Traditionally, the Chardham yatra is undertaken from the west to the east, thus the yatra starts from Yamunotri, then proceeding to Gangotri and finally to Kedarnath and Badrinath. The Great Adi Shankaracharya initiated the Char Dham yatra in an attempt to revive the Hindu religion during the 8th century. Now, thousands of devotees from all around the world become the part of this holy yatra and experience the eternal bliss

Badrinath is considered the holiest of the four important shrines. The town is at an altitude of 3,133 m. above sea level, situated on the left bank of river Alaknanda and exactly between the two mountains Nara and Narayan. The shrine is dedicated to Vishnu, the preserver and falls in the religious itinerary of every devout Hindu.
Tapt Kund : Natural thermal springs on the bank of the river Alaknanda, where it is customary to bathe before entering the Badrinath temple.
Narad Kund : A recess in the river, near Tapt Kund, forming a pool from where the Badrinath idol was recovered.
Brahama Kapal : A flat platform on the bank of river Alaknanda. Hindus perform proppitiating rites for their deceased ancestors.
Sheshnetra : 1.5kms. away is a boulder having an impression of the legendary serpent, better known as the Sheshnag's eye.
Charanpaduka : 3kms. away is a beautiful meadow where the footprint of Lord Vishnu is seen on a boulder.
Mata Murty Temple : Devoted to the mother of Sri Badrinathji. Other important temples include Sesh Netra Temple , Urvashi Temple and Charanpaduka.
Mana Village : Inhabited by an Indo-Mongolian tribe, it is the last Indian village before Tibet .
Vasundhara : As the name suggests, vasundhara is a magnificent water fall. This place is 5 kms. from Badrinath out of which 2 kms. is motorable upto Mana.
Bhim Pul : On the other side of Mana village, a massive rock forming a natural bridge, lies over the roaring Saraswati river. It presents a spectacular view of water thundering down through the narrow passage under the rock and is believed to have been placed there by Bhim, the second eldest among the five Pandava brothers.
Vyas Gufa (cave) : Near Mana Village, this is a rock-cave where Ved Vyas is believed to have composed the Mahabharata and the pauranic commentaries.

Kedarnath hosts one of the holiest hindu temples and is a ever most popular destination for hindu pilgrims and tourists from all over the world in a scenic spot at the origin of the river Mandakani, the shrine of Kedarnath is most venerated amongst the hindu pilgrimes.
The Kedarnath shrine, one of the 12 jyotirlingas of Lord Shiva, is a scenic spot situated, against the backdrop of the majestic Kedarnath range. Kedar is another name of Lord Shiva, the protector and the destroyer. According to legend, the Pandavas after having won over the Kaurava in the Kurukshetra war, felt guilty of having killed their own brothers and sought the blessings of Lord Shiva for redemption. He eluded them repeatedly and while fleeing took refuge at Kedarnath in the form of a bull. On being followed he dived into the ground, leaving his hump on the surface. The remaining portions of Lord Shiva appeared at four other places and are worshipped there as his manifestations. The arms appeared at Tungnath, the face at Rudranath, the belly at Madhmaheshwar and his locks (hair) with head at Kalpeshwar. Kedarnath and the four above-mentioned shrines are treated as Panch Kedar.

Gangotri is the source of the river Ganges and seat of the goddess Ganga. The river is called Bhagirathi at the source and acquires the name Ganga from Devprayag onwards where it meets the Alaknanda. The origin of the holy river is at Gaumukh, which is an 18 km trek from Gangotri.
Submerged in the holy river here is the self-manifested Shivalinga.

Yamunotri is the source of the Yamuna River and the seat of the goddess Yamuna, is one of the four sites in India's Char Dham pilgrimage. The temple of Yamunotri falls on the left bank and was originally constructed by Maharaj Pratap Shah of Tehri Garhwal.
Inside the temple, there is a statue of Goddess Yamuna imprinted in black stone that is mainly worshipped.
Hanuman Chatti: The confluence of Hanuman Ganga & Yamuna River.
Yamunotri Temple: Maharani Gularia of Jaipur built the temple in the 19th Century. It was destroyed twice in the present century and rebuilt again.
Surya Kund: There are a Number of thermal springs in the vicinity of the temple, which flows into numerous pools. The most important of these is Surya Kund.
Divya Shila: A rock pillar, worshipped before entering the Yamunotri Temple.

Cover the chardham shrines in shortest span of time. A real time saver tour program is of 02 days / 01 night. Tour is available Ex-Dehradun.
The first day you cover Yamunotri & Gangotri and on next day Kedarnath & Badrinath. One night halt is provided at Harsil, a beautiful Himalayan valley famous for it's apple orchards also.
Reach Dehradun 01 Earlier to your Helicopter tour to go through medical Check Up and Chardham registration formalities.
Report in our Dehradun Office before 3 PM.

05:30 AM :- Report at Shahastradhara helipad @ 6 A.M. in Dehradun.
07:15 AM :- Take helicopter flight to Kharsali Helipad. Take a poni ride to Yamunotri (06 km one way). After Darshan back to Kharsali helipad.
02:00 PM :- Take helicopter flight to Harsil. Drive 30 km. (in a pre arranged Non AC car / Jeep) to Gangotri. After darshan, drive back to Harsil.
Overnight stay at Camp / Cottage (with attached toilet and bath) at Harsil..

* Itinerary timings can be changed without prior notice.

Pakcage Does Not Includes following:-

1. Tourists have to submit the booking request form, with precise information.
2. Doctor's fitness certificate for high altitude flying is a must.
3. For Charter Tour, booking amount is 70% of total tour cost and balance amount must be paid 45 days in advance of tour commencement date.
4. Please read the information, terms provided in booking request form.
5. Book your tour only if you agree completely on terms & conditions mentioned in this itinerary and also in booking request form.
6. If flight is cancelled due to weather conditions, government’s order, natural calamities, army movement, strikes, market closure, technical / mechanical faults, our responsibility is upto refund of unused sectors only.
7. If weight of a person is above 80kg, INR 2,000/- per kg is charged extra for extra weight.
8. Luggage of one hand bag per person, not weighing above 5 kg, shall be allowed.
9. Timing mentioned in above itinerary, can be changed without prior notice.
10. Payment terms are non negotiable.
11. You have to submit medical fitness certificate, tour declaration form (tour terms & conditions are mentioned in this form) to us, within 05 days of your advance payment.

TOUR NETT / NON COMMISSIONABLE COST INR 1,24,000/- PER PERSON. (based on 05 person trip).
TOUR CAN BE CONDUCTED ON DATE OF YOUR CHOICE, SUBJECT TO AVAILABILITY OF HELICOPTER.
YOU HAVE TO PAY AMOUNT FOR 05 PEOPLE, EVEN IF YOU ARE LESSER NUMBER OF PERSON.
IF YOU ARE LESSER NUMBER OF PERSON, YOU CAN BOOK SEATS IN OUR FIX DATE DEPARTURE TOURS.
CURRENT AVAILABILITY FOR YEAR 2015 FIX DATE DEPARTURE ARE: 25 MAY, 29 MAY, 02 JUNE, 05 JUNE, 06 JUNE, 10 JUNE.
PLEASE DO NOT MAKE ANY PAYMENT, BEFORE CONFIRMING THE AVAILABILITY OF HELICOPTER / SEATS.